And so in March, this actually happens. There was a Nazi party in Austria. Students could try to construct the case for Chamberlain. So they really don't push back on Germany.

And then that was actually reaffirmed in by the Treaties of Locarno, where Germany, itself, agreed to not occupy the Rhineland. This area was seen above all as a supplier of Untermensch labour and as a space where the Nazis' racial experiments could be carried out. 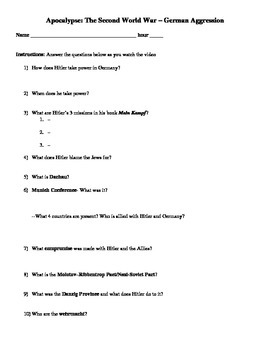 But what we see, as we get intois an aggressive Germany, a Germany that's not being checked by the other powers of Europe. The UK, in particular, once again, [was] not super happy about this. From the 8th of September on, all Jewish shops had to be marked with a Star of David by compulsory decree.

Hitler was open about his refusal to accept many of the terms of the Treaty of Versailles.